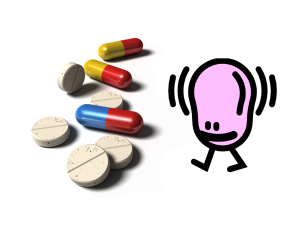 I use this little plastic tablet storage unit with three sub-compartments in it~ each of which can hold up to three to four pills. They are conveniently marked Morning, Afternoon and Night. I like the concept because it ensures I rarely miss any dose of my Bipolar medication.

Does it mean that it is fail-safe? There are the rare glitches despite using this handy aid. Today was one such instance. After I was through with my Yoga session and after breakfast, I dutifully downed my morning dosage. While returning the tablet dispenser to the cabinet drawer I noticed it was empty~ what had happened to the nighttime dosage?

There were two possibilities. One, I might have not placed the nighttime pills along with the other doses in their allotted slot the previous night, as is a daily ritual. Worse, I might have absentmindedly gulped down both, the morning and night doses at one go! Now, this was an alarming thought. This is because my nighttime dosage is heavier and has a sedation effect~ one major side effect of most Bipolar Medication, Mood stabilsers in particular. On the rare occasion that I had previously done this, I had a miserable day. To add to my troubles, I had to read and correct a complex legal Draft by afternoon.

I said to myself:- let me pretend that I have downed a placebo and therefore I would remain unaffected. Well, the ‘placebo’ hit me within an hour! To be more specific, it was treble my normal morning dosage that I had to now contend with. Anyone who has tried tranquilizers would know what I am referring to. Only that in my case these were not tranquilizers but the effect was similar. I wasn’t exactly feeling sleepy but my mind felt numb. My reflexes slowed down and I couldn’t focus or concentrate on anything easily. Gradually my body also went numb.

There was another concern, with the nighttime dose now ruled out, wouldn’t my sleep be disrupted? I decided to shrug aside this as an aberration and get on with the day. To be honest, I will admit it was not an easy day at all. As I write this, I can say I was irritable, grouchy because everything took that extra bit of effort.

As luck would have it, it turned out to be an extra stressful and challenging day, just as the past two months had been. Some important decisions had to be taken which I was forced to postpone to the morrow. What also happens at such times is that my confidence gets shot. I couldn’t even recall whether I had taken the night dosage or not. Was it a short term memory loss issue? (Bipolar and severe Depression adversely affect memory). Could I trust myself to handle important matters?

From a decade of having been through all this, one lesson I have learnt is to isolate such negative and crippling thoughts until my mind is better prepared to face them.

Tomorrow, after all, brings a new day.