I had taken the usual path for my morning walk. On the way I saw the park which I came across daily but had never visited. For a change I decided to venture in.

Although it was open to visitors, because of the early hour I could see no one there. It was a pleasant early morning and I decided to spend some time relaxing in there. The bench was difficult to resist and made me say to myself, I could sneak in a small break and then resume my walk.

The bench was cold due to the morning dew and that prompted me to remove my sneakers: Aah! The feel of the cool wet grass under my feet!

Shut my eyes for a moment and tried to enjoy the quietness around me. The only sounds were the chirping of birds which were music to my ears.

There was still something bothering me and I could not relax completely. On opening my eyes, I saw an old man sitting in front on the opposite side of the park.
He seemed to be enjoying the moment much more than me and smiled at me.

‘It is your first time in this park’ he said. I nodded back.

‘You have something on your mind that’s bothering you’ he said ‘Let me see if I could be of help. Look to your right, do you see the Red suitcase?’

Before looking anywhere, I asked myself whether it was worthwhile going through this at all? Wasn’t this old man being intrusive? I did not have much faith in mystics either. 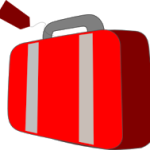 All the same, I could not but look towards my right. Hang on! Had I seen this bright Red suitcase when I walked in? I certainly could not have overlooked it…

‘Don’t trouble your already troubled mind. This really works, look, it will do you no harm. Just think of the three things which are troubling you the most right now. They have been at the back of your mind for a while..Think of them’

I decided, let’s try this out: of course it can’t work- at least I can prove him wrong.

Hesitantly, I ruminated on my top worries and anxieties. Not difficult at all, easy to identify them:
Uncertainty about the future, health concerns and lack of zest.

‘Now look at the suitcase with concentration, and think of these troubling thoughts.’
The Bright red suitcase suddenly popped open- just like that!
It was magical! As I began identifying each of those negative thoughts a man who appeared out of nowhere, would come to me and slide his hand right into my brain! He would rummage inside and pull out a sheaf of dull rusty brown material and dump it into the bright Red suitcase. It was confounding to watch someone having control over me, with me being rooted to the bench.

One worry gone and he would repeat the process for the next. I noticed the moment he began working mechanically on the next set, I’d already forgotten my previous worry!

At the end of it all, the bright Red suitcase was crammed full. He came back to me and offered his hand. Mesmerised by now, I followed him. He picked up the Suitcase and led us to the far side of the park. I could hear the pleasant sound of…of a stream flowing? It turned out to be a stream ending in what looked like a waterfall. Strange! Never heard of one in this area!

The man took us to edge of the stream and threw the suitcase into the gurgling waters. It disrupted the flowing water with a big splash. I could see the bright Red of the suitcase bobbing in and out amid the froth of the stream as it was rapidly carried further away from us. As I watched it going further away it was getting difficult to spot it, despite the bright red colour. The now tiny dot was there for one moment and gone down the gushing waterfall the next..

Amid all this unnerving action, It dawned on me that I was feeling like a new man! I could not even remember what my worries were! I found myself sitting on the bench again.

The old man said with a glint in his eyes, ‘Now look to your left. Do you see another Suitcase?’

This one was a fluorescent Bright Green Suitcase.

Enraptured, I did exactly as I had been told to. It was an indescribable moment!

On opening it I could see an image of my mind it! Cleared of all the negative dull grey thoughts and worries, the bright Green of positivity was shining through! My Brain appeared to be a network of brilliant green strands, dazzling to look at!

Everything that I could ask for was there in abundance:
Creativity, Passion, Enthusiasm, Genius, you name it and it was there!

I gratefully picked up the bright Green suitcase and turned around to thank the old man who I had thoughtlessly mocked,.

He was nowhere around. I checked to see if my prized possession was safe: the bright Green suitcase, was gone, too! In fact, the early dawn hour had given way to gentle sunlight, and there were many people in the Park.

‘Are you alright’ a small boy asked me sensing I was looking lost.

I sighed, ran my hand through his hair and assured him I was fine. Come to think of it, I had never felt better in my life!

(This post had earlier been published on my personal Blog. I felt it was worthwhile repeating it here: Positive self affirmations do work. Creative visualisation, as in this case, multiplies the impact. When the sub-conscious mind is thus programmed, the outcome is magical! I tap my sub-conscious mind at will, simply by meditating)