Hi! I am Venugopal. I was a brilliant student since my childhood and I always topped the class. I did my B Tech from NIT Warangal, one of the top engineering institutes in India. During my 3rd year of my graduation, I was able to present a research paper in Canada, a dream for many of my peers. My career graph was at an all time high. I planned to apply for Masters in US and was making preparations right from my fourth year beginning in August 2011. I applied directly for PhD without applying for Masters (now when I look back, it looks like a highly ambitious decision).

Meanwhile, I got acquainted to one of my successful alumni who started his own venture. Taking cue from him, I too felt like I should start a venture: he encouraged me a lot and even offered to mentor me. I convinced my parents and started working on my venture.

At this point in time the shift happened.
“Just when you think you have it neatly covered, you lose it all.”
I started to get many ideas, grandiose dreams and I lost touch with reality. I started spending recklessly, continuously blabbering about my baseless business plans and had sleepless nights. I avoided talking to people in my circle who could identify something was wrong and the people I talked to couldn’t understand why I was behaving like this. I had a team of students and I promised every one of them great jobs. I used to say this ‘yugam’ (era) is going to end (Inspired by popular 2012 Yugantham Movie). I was the savior of Earth. I was reincarnation of Lord Vishnu (This was the peak of mania) That’s the biggest problem in our society – no one has knowledge of symptoms of bipolar. My paternal and maternal grandmothers, my uncle were bipolar victims. Both my parents saw them suffer. Even they couldn’t figure out what’s wrong with their son.

I spent close to one lakh rupees recklessly (a huge amount for a student like me then!)
I returned home after my symptoms worsened. The last night before I was admitted to hospital was a nightmare. I behaved very aggressively- pulled over all clothes at home, wreaked havoc.  I have no words to write about that dreadful night. I was admitted to hospital for 15 days and returned home. Soon after, I had another mania phase even under medication. This time my parents sensed and took me to a different hospital immediately. I was put in a psychiatric ward for a day due to my aggressiveness. After about a week at hospital, I came home and this time I was subdued.

I couldn’t still believe what happened to me. My career crashed. I couldn’t join the job for which I was selected. I couldn’t go to the US for my Masters.
My startup dream never took off. All through this, my parents were a huge support to me. They counseled me a lot. My mother had great dreams for me. She used to comfort me and cry when I wasn’t around. I then decided to apply for Master next year. The fear for my career made me go into depression. I was again put onto medication.

I joined a decent college in Hyderabad for M Tech. I don’t know what triggered the mania this time, but I had to go to hospital again. Thanks to my parents and holidays during college which meant I was at home, they could sense my upcoming mania very soon. The medicines again started and also the side effects. Acne, restlessness, laziness, unable to find pleasure with my favorite activities etc. During mania, although my startup has potential, I used to overestimate future profits and my abilities. As a result, I quit my M Tech so as to continue with my startup. 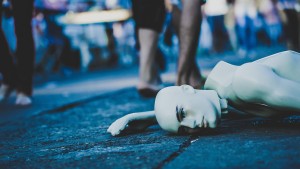 I was put on lithium and exactly after six months, I realized my ideas are not so successful and decided to go for Masters. I applied for it and secured admission in a decent college. I obtained visa and sought doctor’s advice and he said I can go abroad if I continue medication. I left for US with a year’s medicines stock. Everything was fine but due to climatic conditions, sudden isolation from family support, overload due to studies, I was depressed and couldn’t focus on studies so I returned after 2 months stay. My medication was changed to address my depression.

Six months later, I was diagnosed with Mania again. This time even I could sense that I was going into Mania and conveyed to my parents. This time, I recovered very soon. In fact, the medicine is so effective that I never felt that I was on medication unlike my previous mania phases.

Family support is the key to recovery. In my case, I am very glad to have a great family. Stress is a trigger as said by many. But I found that all my manias begin similarly. I get the same grandiose thoughts about my startup. So I decided to use it as symptom to for myself. After being diagnosed bipolar, I took sleep patterns very seriously. I never stayed up late night because I learnt that sleeplessness triggers mania. Every day I write what I have done, what my thought process is. This allows my parents to read my mind easily which helps if they are in doubt if I am progressing into mania. I regularly exercise and even during mania medication (lithium) I was successful in shedding weight several times.

My first mania was due to unknown reasons for me but I could say that my second and third mania are due to my worry for career. I stopped comparing myself with my classmates whenever a comparison thought pops up in my mind – I simply ask did they suffer from bipolar. If answer is no, I shouldn’t compare. I am carefully aligning my career such that even if I am jobless due to another mania/depression, I can sustain.

There is huge social stigma in our country about mental illness.
I just say one thing, for someone’s heart gets a disease, for another liver is affected, for yet another kidney etc. Similarly for me it was my brain. Everyone should understand that the brain is just another organ and it too can get diseased. As a bipolar survivor, some day I will become successful in life and show everyone that even bipolars can be successful and will help my community.

NB.
~This is a true story. Name changed to protect identity of the person who entrusted it to me
~Edited and re-drafted by Vijay Nallawala